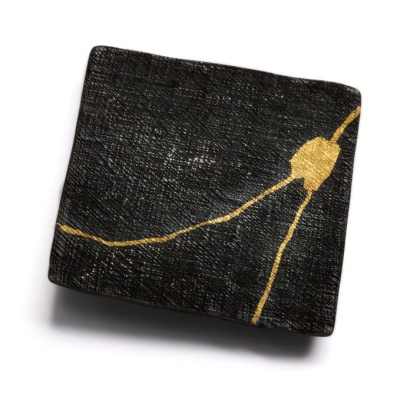 A glimpse into antique Japanese inlay technique: Nunome Zougan
This workshop will cover the basics of Nunome-Zogan, or waive-inlay in English.
This traditional metal-smith technique has its origin in China and although the name can vary as it is used in several Asian countries. In Japan the technique was used to decorate the mount of the sword in its various component parts, for the decoration of accessories used by Samurai warriors, valuable boxes and precious hair ornaments for women. The technique is also applicable to jewelry and other kinds of objects.
The technique allows the inlay of silver and gold patterns onto iron and copper based alloys such as Shakudo and Shibuichi. During the darkening process the color of the base metals will turn into different shades of black, gray and blue black. This effect emphasizes the silver and gold inlays. It’s possible to create anything from subtle glittering gold traces to big and intricate motifs on top of the dark metal background.

Program of the workshop:
- Creation of the base texture on different types of metal.
- Execution of the silver (or gold) inlay based on one’s individual design.
- Polishing of the samples.
- Darkening of the samples with the rokusho coloring technique.
- Besides samples it’s possible to create some simple pieces of jewelry.

Duration of the workshop: 20 hours to split on 3 days.

Biography:
Elisa Deval graduated at the Alchimia contemporary jewelry school in Florence. Her teachers were artists Manfred Bischoff, Manuel Vilhena, Lucia Massei and Doris Maninger. Her jewelry has been shown in international galleries. In 2009 she developed an interest in Japanese metal techniques, she studied in Japan with professors Noboru Ando and Kimiaki Kageyama. Since 2012 she has been teaching week-end workshops on Nunome Zogan technique. Since 2014 she teaches at Alchimia school.